This is the first entry to a blog series that I will be starting to inform the latest conditions and outlooks for groundwater, surface water, and weather related topics.  Check back often for updates!

As we transition from the hot Texas summer to the cooler fall months, we should see some interesting changes begin to occur in the overall climate pattern for the area.  The first or second week of September usually marks the first cold front that actually drops the temperature across our region.  When the first cold front occurs the pumping pressure on our aquifers, just like clockwork, dramatically changes.  If we take a look at the hydrograph for the Bertram monitor well 5724101, we can see this exact trend that occurs across the entire Trinity aquifer every year. 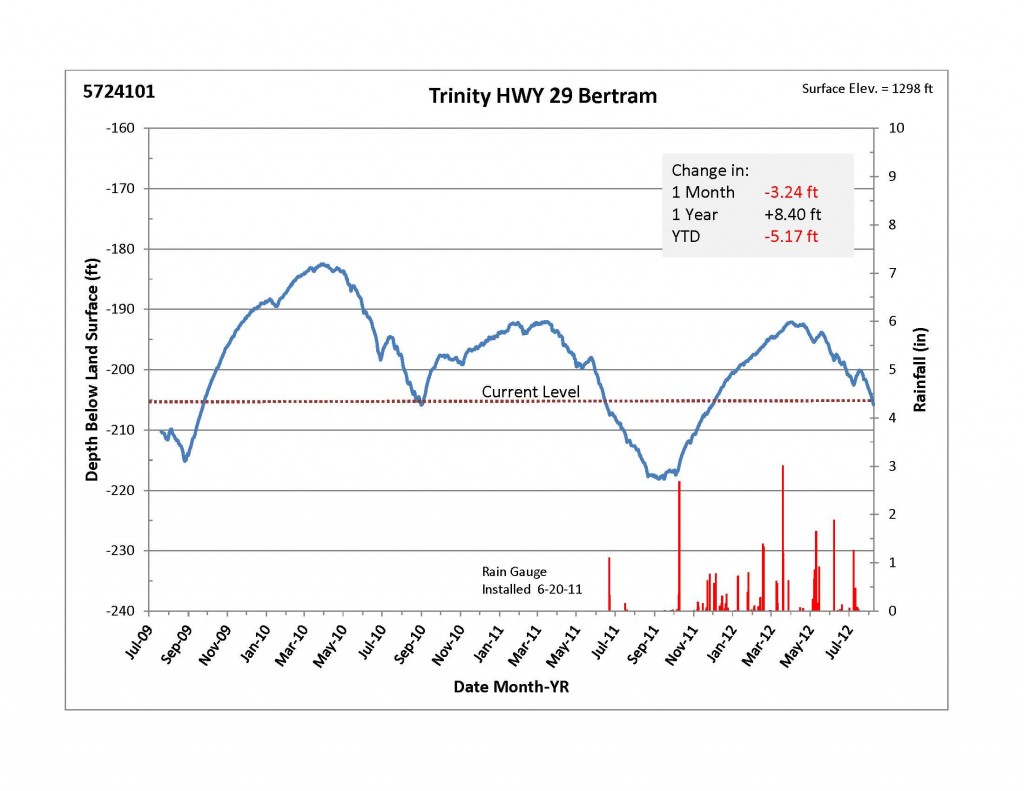 In the hydrograph above, you can see that come September of each year there is a transition time from water levels trending downward to water levels turning and trending upward.  This is caused by two factors 1) the reduction in pumping pressure allows the aquifer to stabilize itself more and 2) the efficiency of recharge to the aquifer increases as we move into fall/winter.  Compare the fall/winter periods of 2009 and 2011 to the fall/winter of 2010.  You can clearly tell that the water levels do increase from the reduction of pumping and increase significantly more in 2009 and 2011 due to more rainfall that led to recharge.

As I mentioned early, there will be some significant changes to the climate pattern starting in the next month or two.  The phenomenon  known as El Nino will begin to effect the region.  El Nino/La Nina is a weather cycle that is determined by the sea surface temperatures (SST) in the Eastern Pacific Ocean.  When SST are warmer than normal the event is classified as El Nino, and colder than normal SST lead to La Nina patterns.  I won’t get into much more detail, but if you are interested there is a ton of information from NOAA on this weather event at: http://www.elnino.noaa.gov/.

The map below shows the SST anomalies for the entire globe.  The Eastern Pacific Ocean along the equator is the area that influences the El Nino, La Nina patterns.

The warmer than normal temperatures have been established for a few months now.  The official NOAA status calls for neutral conditions right now, but will be officially declared an El Nino event after three  consecutive months of SST anomalies over 0.5 degrees Celsius, or sometime in the next month or two.

So what does this all mean to Central Texas if we are talking about the Eastern Pacific? The warmer waters of the Eastern Pacific generally lead to a southern shift in the jet stream across the United States. This would lead to Texas, and the rest of the southwest, seeing the path of upper level low pressure systems move directly across the region.  This in turn would bring higher rain chances and lower temperatures generally.   In some rare years the El Nino/La Nina events don’t pan out as predicted, but the vast majority of the time it will tend to influence the climate as predicted.

I have put together a graph  from 1980 to the present of the rainfall for Burnet, TX, the observations of  SST anomalies, and the thresholds for El Nino/La Nina. 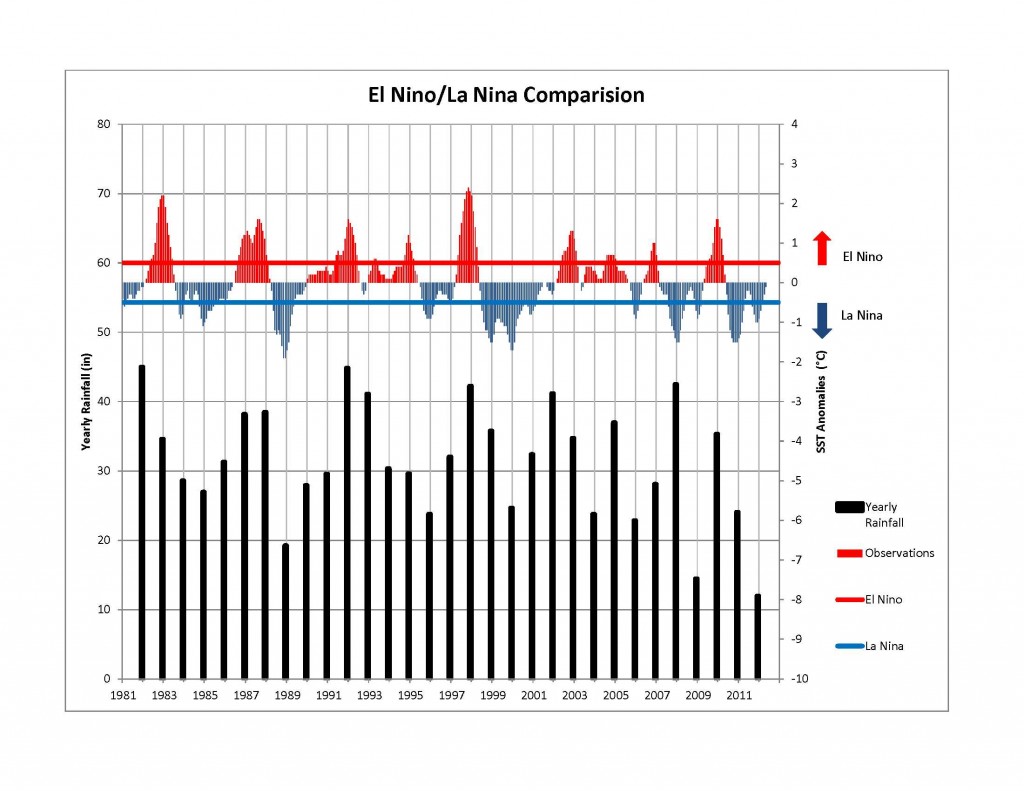 The rainfall for this graph is based on a yearly total from January-December.  El Nino and La Nina events tend to have the strongest impacts during the fall/winter/spring months.  Therefore it can be slightly deceiving when trying to compare El Nino to yearly rainfall, but for most years it still paints a picture of what is happening.

For the graph below I have pointed out the La Nina periods (what we have been in the past two years) with the decreased rainfall. 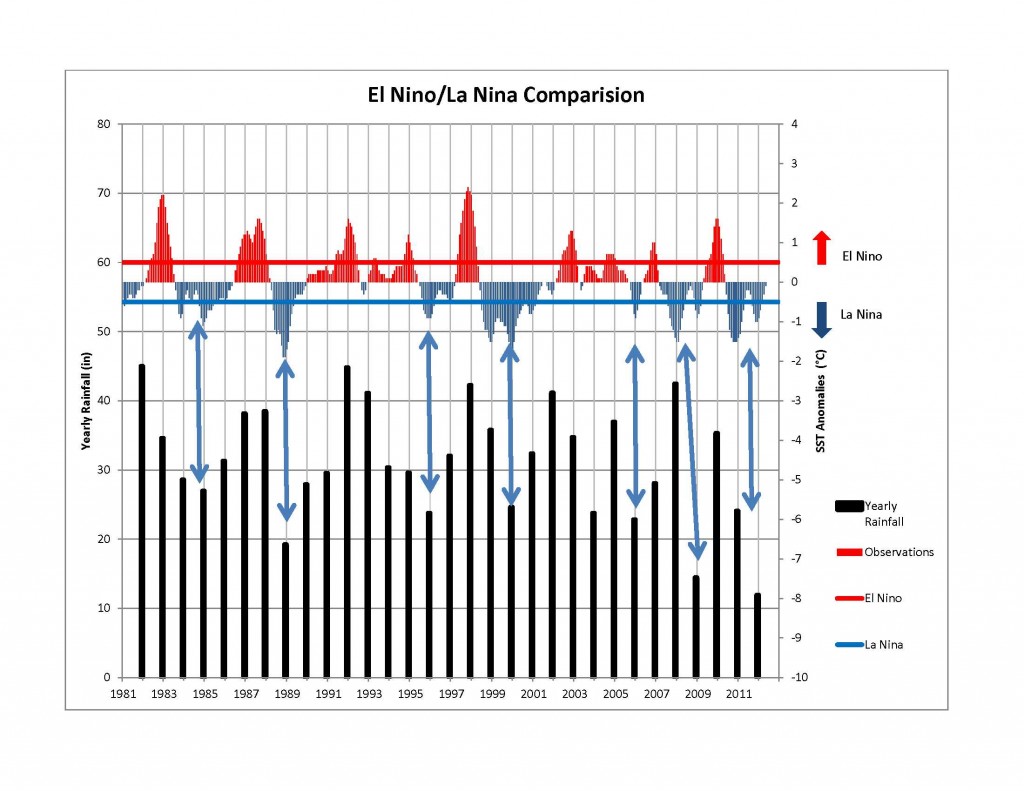 The graph below I have pointed out El Nino years and the associated rainfall totals. 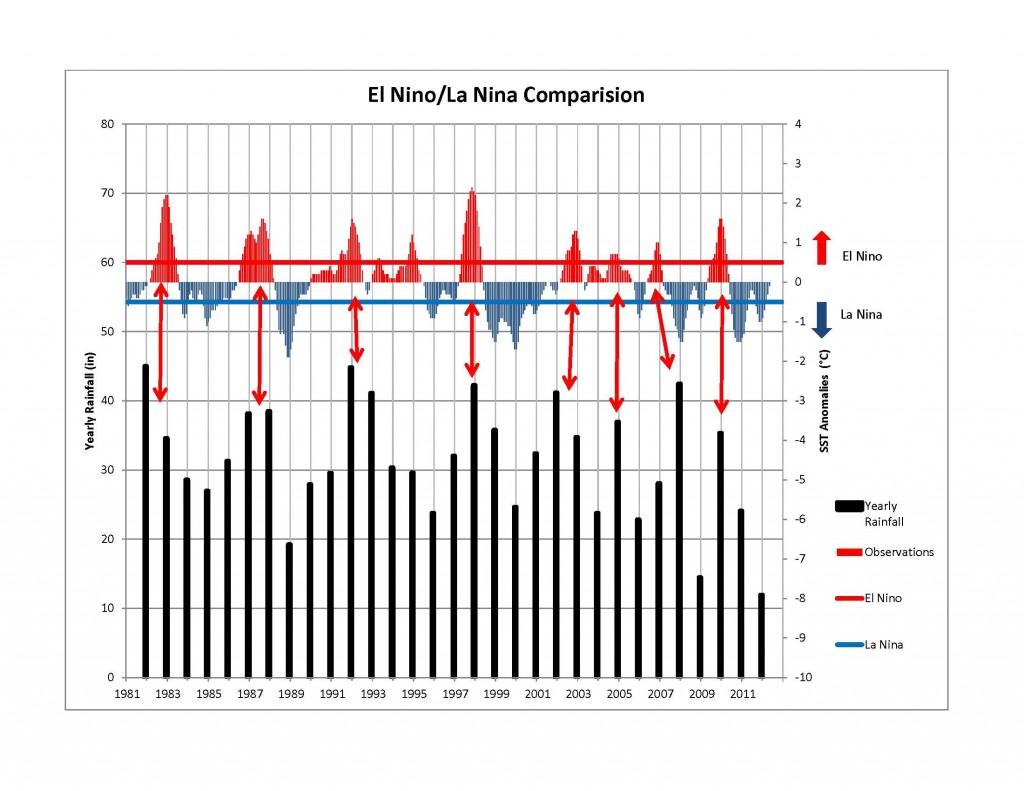 The Climate Predictions Center at the National Weather Service issues monthly climate predictions.  The predictions are based on three month time frames.  The latest outlook for the period of Sept-Oct-Nov shows equal chances for rain over most of Texas.

The next forecast period of Oct-Nov-Dec shows the beginning of the El Nino setting in place.  The chances for precipitation are above normal for most of Texas and they remain above normal through fall, winter, and into the spring months.

What this situation is setting up for is potentially a higher than normal chance for rainfall through the fall/winter/spring period.  This would be great news for our aquifers across the region, as this time period is when the aquifer recharge is highest because of reduced pumping, lower temperatures, and lower evapotranspiration rates.   The outlook is promising and with a little bit of luck maybe it will hold true.

Check back in on the blog periodically for new updates. 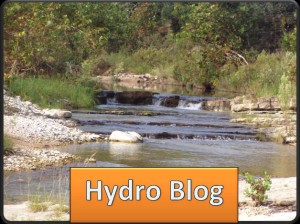 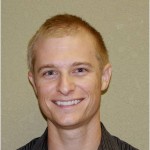